What Katie and Sophie Taught Me About Turkeys

I’ve been fortunate to get to know many farmed animals through my work as an animal cruelty investigator. All of the animals I’ve met have been unique beings worthy of kindness, respect and life, and while I love all animals, turkeys hold a special place in my heart. I’d like to share the story of two special girls who changed my life and left me in awe of turkeys. 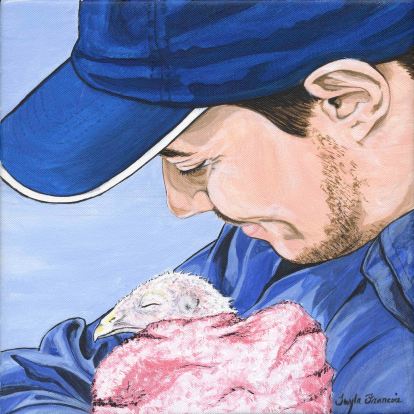 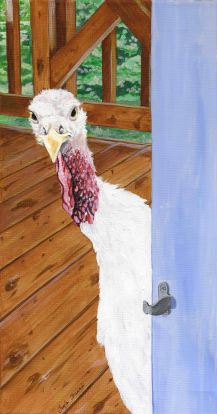 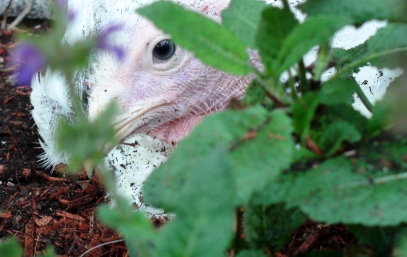 Painting of “Katie” by Twyla Francois

Sophie in the fall.

Katie and Sophie on the first day of of their rescue.

My husband and I had just been to a massive turkey factory farm to document the loading of the baby birds (turkeys reach slaughter-weight at just 10 to 18 weeks of age – they’re still blue-eyed and peeping). We left feeling completely helpless to stop their killing.

The next day, we received a call from a supporter in the area telling us she had found two shivering, ragged turkeys in the ditch. We immediately ran out to pick them up. When we arrived we were surprised to see how small they were and realized the workers had likely thrown them to the side as they were below slaughter weight. Sophie was the smaller of the two. She readily took to being held and cuddled. Katie was larger, terrified and near shock. I held her in my arms, covered her eyes with a towel and sat quietly warming her. While first resistant, and very likely remembering those rough hands from the day before, she eventually calmed down and dozed off.

That fear of hands stuck with Katie for weeks after the day of catching. She had clearly bonded with us – she would follow us, stare into our faces and search our eyes, and even hug us in the way turkeys do (wrapping her long neck around ours), but if we tried to pet her, she would shrink away. Thankfully, her fear of hands eventually subsided and she sought even these out for comforting pets.

Katie and Sophie became fast friends with Katie as the protector of the smaller Sophie. Katie led the conversations she and Sophie would have daily.  Katie would start with an inquiring “PEEP?” and Sophie would respond with a down-toned, reassuring “Peep.” This conversation was repeated endlessly throughout the day. Katie also sought out the best sites for grasshoppers, then loudly announced them to Sophie with a series of staccato “POP’s” that sounded surprisingly like popcorn popping. When Katie would spot a potential predator she’d stand tall and still, with one eye fixed on the threat and yell to Sophie in an increasingly high “WEE!” followed by a flat-toned “WOOO”.

Katie grew shockingly quickly.  Within weeks walking became a challenge and she developed a limp in her right leg.  Then, even breathing and controlling her body temperature became difficult.  Because turkeys have been so selectively bred for maximum growth in minimum time, her skeletal and cardiovascular systems were struggling to support her massive body.  We knew her time with us would be short so we made the most out of every day together.  Katie and Sophie spent long hours hunting insects, dust-bathing and cuddling with us.

Katie was just seven months old when she died of congestive heart failure, her baby eyes were just beginning to change colour. They were going to be a beautiful amber. Sophie was allowed two additional months because of her smaller size reducing the stress on her heart. Sophie’s eyes changed to a stunning crystal brown and she began laying eggs, but at 9 months of age, Sophie left us too.

I think of Sophie and Katie every day. The time I was allowed with them is one of my most cherished memories – full of warmth, happy peeps and purrs. After seeing the depth of forgiveness and resilience of these incredible animals, I continue to be in awe of all that turkeys are.

Artist’s Statement for Twyla Francois
We have a schizoid relationship with animals, choosing to pour out kindness and compassion to some, while casually accepting the suffering of others. Based on over a decade of investigations into farmed animal cruelty, my work seeks to challenge our basic beliefs about farmed animals and foster a sense of compassion to all animals.

2 Comments on “What Katie and Sophie Taught Me About Turkeys”